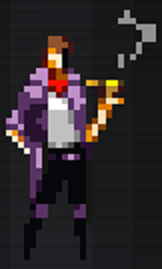 "One of the few remaining humanoids in the galaxy to wear a tweed jacket and smoke a pipe, Josh is willing to give long (and generally inaccurate) explanations of any object, event, or person. Many suspect that he was imprisoned for boring people to death."

The scientist Josh 'Ntello is unlocked by owning the Dungeon of the Endless Crystal Edition and does not have to be encountered in the dungeon like other heroes.

Josh has the highest Wit in the game alongside Wit upgrading abilities. He is best left in the back, overclocking minor modules for extra defence and using Armchair General when things get nasty for other teammates. His high wit makes him the operator who generates the most resources in the game, and makes other operators on the team generate more with his "Knowledge is Good" passive. His drawbacks are his low defense and DPS when alone and his inability to repair without an appropriate item, making him a bad choice for holding a chokepoint on his own.

As the hero with the highest wit, Josh is obviously an ideal candidate for a primary operator. He even improves all other operators on the team due to Knowledge Is Good, and will single-handedly give you more raw resources than any other character. In a game where everything you do is based around resources, this is a huge deal. Gaining more resources earlier will help you keep them in the long run, as you will generally be in a better position to defend yourself and your modules with better turrets and more of them. Josh is generally best left in the back lines where he is out of harm’s way and where his Armchair General can be used to effect. If he needs to be in combat, he is much more effective with his team in a room of minor modules thanks to Team Spirit! and Overclocked.

But Josh is terrible in a fight. He is not designed to be a combatant, and even falls behind other operators in this regard. He has some of the lowest HP, defense, and DPS of any hero. Team Spirit! helps, but only buffs his fighting skills to average at best - and only in the presence of teammates that you may not have to spare. Overclocked is a great active but lasts only for a short time, making extended engagements impractical, and Armchair General can’t be used at all when he is actively fighting. Josh also lacks repair, further nudging the player towards using him in a backline role instead of as a chokepoint defender like Rakya. While he is fantastic at generating resources, you are effectively throwing away a defender that you may need.

Josh is involved in the following events:

When found in a dungeon:

When opening a door:

When repairing a module:

When low on health:

When carrying the crystal:

Community content is available under CC-BY-SA unless otherwise noted.
Advertisement